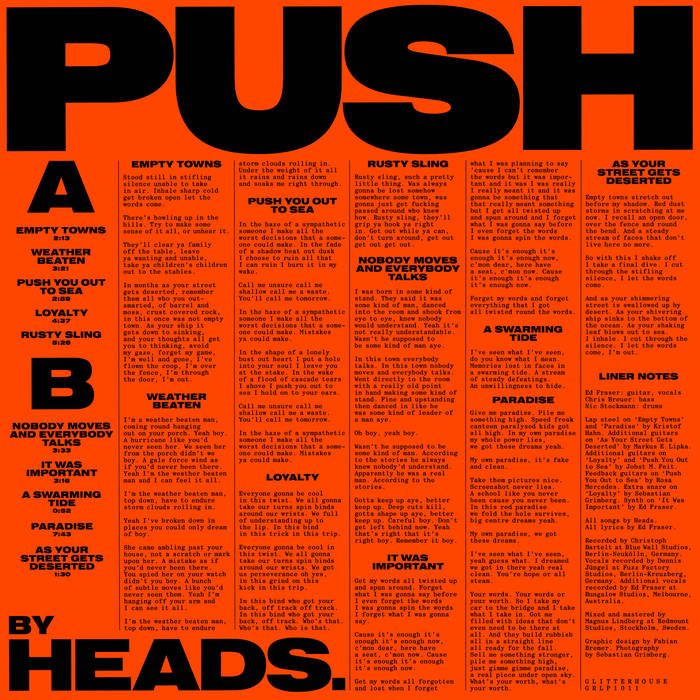 Are you interested in a band that reminds you of the best parts of The Jesus Lizard, TAR, Idles, Lysistrata and Protomartyr?
You’ve never heard of these bands but you’re open to listen, ready to be challenged, and have an appetite for something new and original? Either way - you’ll love HEADS.

PUSH is a wall of sound. A monolith.

PUSH is the follow up to HEADS. critically acclaimed Collider album, described by Arctic Drones as: “Art rock meeting sludge in a carefully arranged interplay of grave digging and marble sculpting. A bleak redefinition of heartland rock that’s situated on the verge of the savage and the sophisticated."

On PUSH the three-piece from Berlin and Melbourne continues to evolve their very own blend of Noise-Rock, Post-Punk and Alternative Rock. Upon the bands' sprawling soundscape you'll hear Ed Fraser’s voice preaching their message - experimental, wild, distinguished and radical, yet still catchy.

“From start until end Push is about distance, adaptation, change and connection,“ the band comments. “Each song will tell you a story, the album is a narration on empty places, weather beatings, toxic things. We've been calling Push our 'Berlin' record as this is the first time we've made an album in Berlin, where we were all living at the time. Recorded with Christoph Bartelt from Kadavar in their top floor studio in an old warehouse; for a couple of weeks every morning we'd travel through East Berlin to some mechanics factories, climb to the top of some dirty old concrete stairs, through a heavy steel door and into a beautiful wood-panelled clean haven of a studio where we'd all get to work. Being local meant we could have people like Kristof Hahn from Swans come in and play on the album, and it meant we could make Push quickly. Magnus Lindberg of Cult Of Luna, our frequent collaborator, mixed and mastered Push in Stockholm, he has our sound more accurate than ever this time. There's more guests and more stories to come, we're excited to share Push with you.“

BIO:
HEADS. is Ed Fraser (vocals, guitar), Chris Breuer (bass) and Nic Stockmann (drums). Founded in Berlin in 2014 the trio released their self-titled debut EP in 2015 on This Charming Man Records, then played more than 100 shows all around the globe with artists such as Metz, Daughters, Nothing, Protomartyr and Whores. 2018 saw the release of the bands' acclaimed full-length Collider, followed by more EU and US touring.

All songs by Heads.
All lyrics by Ed Fraser.